Bio-economy, minerals and natural resources are currently topical issues. Bio-economy is included in the Government programme as a spearhead project. The role of natural resources and their sustainable use in the future success of Finland was discussed at a seminar arranged in May to celebrate the 70th anniversary of the Foundation for Research of Natural Resources in Finland.

The theme of the seminar held in Helsinki on 19 May 2022 was “Natural Resources in Tomorrow’s Solutions”. Some 60 invited guests representing the Foundation’s stakeholders and interest groups attended the seminar. 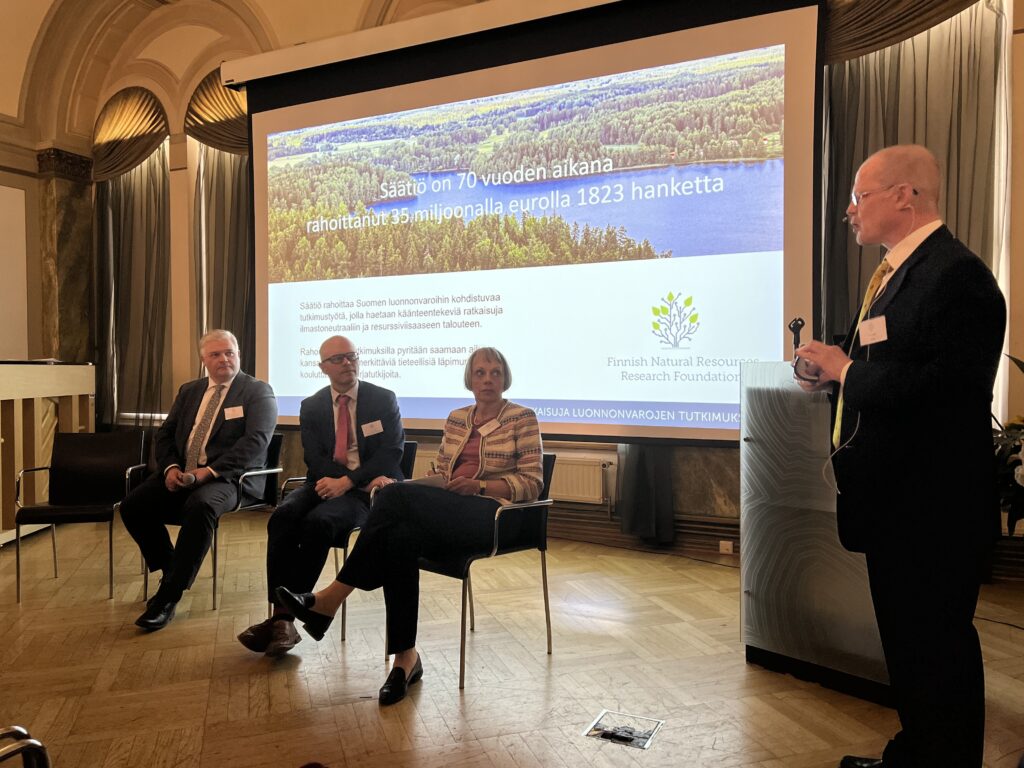 The Foundation’s origins are linked with coal trade during WW2

The seminar started with an overview of the Foundation’s history presented by Pekka Nurmi, Chairman of the Board. The Foundation has its roots in the fund established by Finnish coal traders during World War 2 to equalize the price fluctuation of coal and coke.

After the war, the fund continued operating until the year 1949. In 1952, the assets of the fund constituted the basic capital of a new non-profit foundation established to advance the research of natural resources in Finland. According to its Charter, the purpose of the Foundation is to promote and support research and experimental activities related to natural resources. In the early years, the focus was on the use of forest resources but, over the decades, the activities have diversified.

Up to date, the Foundation has supported altogether 1,823 research projects in the field of natural resources with grant funding of a total of 35 million euro.

Today, as stated by Nurmi, the funding provided by the Foundation is primarily targeted to research aimed at finding epochal solutions for a climate-neutral and resource-wise economy. Doctoral and post-doctoral researchers are supported in pursuit of achieving internationally significant scientific breakthroughs. In the next grant application round, the intention is to award a grant to, at least, one doctoral researcher from Ukraine.

At the seminar, the Foundation presented the doctoral thesis award for the second time in its history. Last year, the 10,000 euro prize for the best doctoral thesis of the year was awarded to Dr. Mamata Bhattarai, who earned her PhD from the University of Helsinki. This year, the award went to Doctor of Technology Lassi Klemettinen from Aalto University. In his thesis entitled “Behaviour of trace elements in copper smelting processes – LA-ICP-MS as a tool for sample characterisation”, he discussed the optimal use of both virginal and recycled raw materials in flash smelting processes.

A keynote speaker at the seminar, Simon Michaux from Geological Survey of Finland (GTK) presented highly critical views regarding the sufficiency of mineral resources required by the green transition. According to Michaux, the resources will only suffice for a start.

In general, the atmosphere at the seminar was optimistic. In her address, Johanna Buchert, President and CEO of Natural Resources Institute Finland (Luke), stressed the vital role of biotechnological research to facilitate the more efficient utilisation of the limited natural resources with a focus on more valuable materials.

The official seminar programme ended with video presentations of six promising young researchers. Ted Nuorivaara, Erfan Kimiaei, Eva-Maria Roth, Markku Pirttijärvi, Veronica Badažkova and Pasi Korkalo have received grant funding from the Foundation. They described the context of their research in the field, shared their views about the role of the Foundation’s funding for their research projects and also explained how the results of their research will advance the sustainable use of natural resources in Finland.

The event ended with a buffet and joyful social gathering. The venue was beautifully decorated with bouquets of flowers and, at the end of the event, the guests were invited to take a buttonhole flower or one as a gift for a friend. 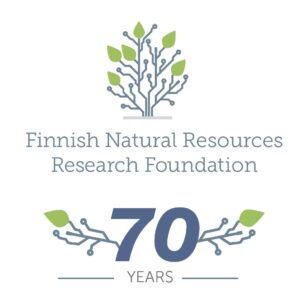 The Foundation for Research of Natural Resources in Finland was established in 1952 to promote and support research and experimental activities aimed at developing the yield and techno-economic utilization of Finland’s forest and other natural resources.

Up to date, the Foundation has supported altogether 1,823 research projects in the field of natural resources with grant funding of a total of 35 million euro.

At the seminar arranged to celebrate the 70th anniversary of the Foundation for Research of Natural Resources in Finland, Associate Research Professor Simon P. Michaux from Geological Survey of Finland (GTK) presented critical views concerning the plans to advance the green transition. According to Michaux, the currently known global mineral reserves will not be sufficient at all to supply the metals required for the transition.

In general, the atmosphere at the seminar was optimistic. In her address, Johanna Buchert, President and CEO of Natural Resources Institute Finland (Luke), stressed the vital role of biotechnological research to facilitate the utilisation of the limited natural resources more efficiently and with a focus on more valuable materials.

“However, bulk production is also necessary because it serves as the foundation for processing”, Buchert said.

According to Buchert, gene modification and gene editing are key research areas.

“They will help us improve the disease resistance of forest trees and obtain a larger volume of processed products from a smaller area. We can grow easily digested faba beans and remove harmful compounds from raw materials”, Buchert listed the potential benefits.

The problem is that, in Europe, anything with the word ‘gene’ in it is more or less unacceptable even though it has nothing to do with gene modification.

“This attitude holds back research and there is a risk that the rest of the world will progress ahead of us”, Buchert said.

According to Buchert, there is a ‘knowledge gap’ among those who make decisions on funding and regulation.

“At Luke, we endeavour to fill this gap by providing decision-makers with research synthesis reports, and we hope that other research communities do the same. In addition, we need ‘patient’ money, which is exactly the type of money that foundations have”, Buchert explains.

Erno Järvinen, Head of Forests and Bioenergy in the Ministry of Agriculture and Forestry, would like the foundations in Finland to consider improving the division of work when it comes to the funding of the research of natural resources.

Finally, Buchert discussed the new materials that can be developed from, for example, cellulose and proteins by using biotechnological methods. “Many fear that this type of cellular agriculture might override the traditional agriculture, but that will not happen. Cellular agriculture also needs raw materials, and someone must grow them”, Buchert explained.

Demand for electricity will grow exponentially

Associate Research Professor Simon P. Michaux presented a research carried out at Geological Survey of Finland (GTK) to determine how much minerals and mining industry would be required to transition away from fossil fuels. Based on energy consumption data from 2018, the researchers calculated the size of existing transport network and estimated what the change-over to electric or hydrogen-fuelled means of transport would require from vehicles, power plants, mining industry and electric network.

The outcome was stunning. The demand for energy and electricity, in particular, will grow exponentially.

While there are almost 46,500 power plants in the world today, a total of 220,000 new ones would need to be built. The figures include water, solar, wind, bio and nuclear power plants, and the assumption was that as many new plants as possible will be constructed.

The required additional capacity of electricity production would amount to nearly 38,000 terawatt-hours per year, of which 70 percent would be wind power and the rest solar power.

In addition, to manage interruptions in electricity production due to the fluctuation in wind and solar power, extra capacity of over 3,100 terawatt-hours would have to be constructed. 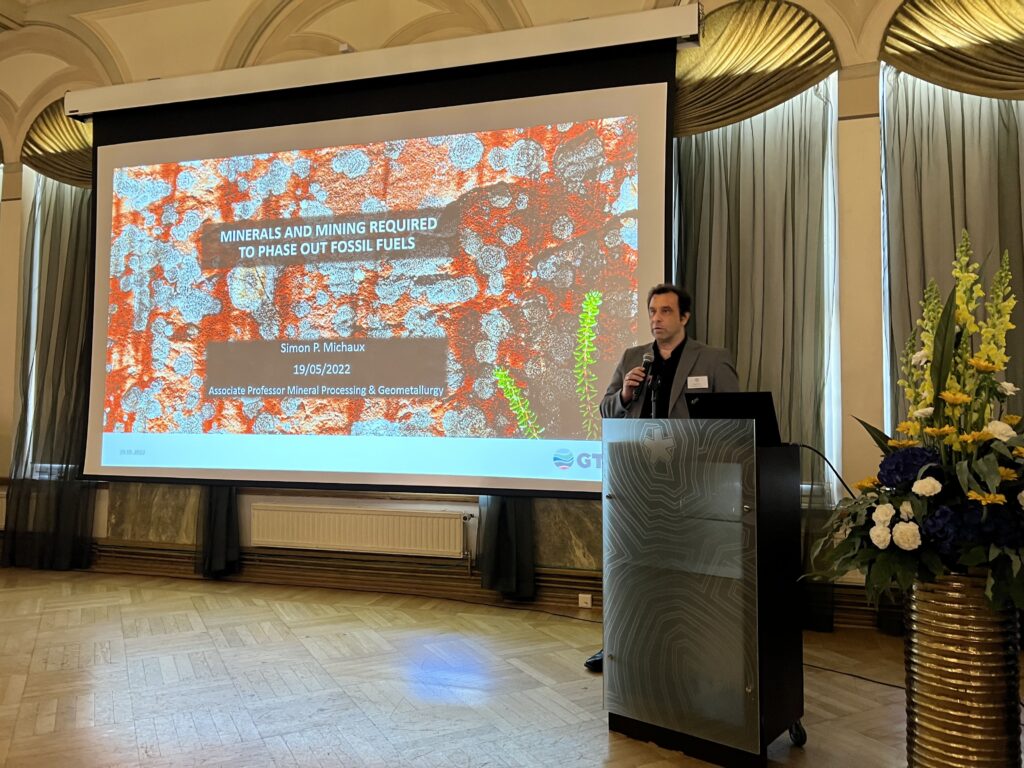 Simon P. Michaux on ”Minerals and mining required to phase out fossil fuels”

It is not easy to open new mines in Europe

The calculated infrastructure and fleet call for minerals globally. For example, about six times more minerals are needed to manufacture an electric vehicle as compared to a traditional combustion engine car.

A known mineral deposit will necessarily not be exploited at all. For example, the mineral content of the deposit may be too low for profitable exploitation.

“In Europe, as a result of the pressure exerted by citizen movements, many countries have given up the ‘dirty’ mining industry, presuming that it can be carried out elsewhere. A good example is a two-billion-euro lithium mine project in Serbia”, explained Jarkko Vesa, Senior Specialist in the Ministry of Economic Affairs and Employment.

On the other hand, ore processing methods have advanced so that extracting minerals from the mining wall rock and tailings of former mines might be possible and profitable. According to Vesa, even this type of exploitation of materials may be disapproved by citizens.

Michaux says that, for every thousand deposits discovered, only one or two mines are opened. If a mine is opened, it typically takes 20 years until commercial production. Also, due to their poor profitability, two or three out of ten mines in production will be closed prematurely before they actually dry out.

The rise of mineral prices cannot be avoided

According to Michaux, the challenges related to the green transition have been seriously underestimated. Maximal utilisation of nuclear power would be vital. Biofuels may be a feasible solution as airplane fuel and to manufacture plastics, but they will not be sufficient to completely phase out fossil raw materials. Alternatives should be found for lithium as battery raw material.

“Whatever we do, there will be a severe lack of minerals, and as a result, the prices of all metals will rise. This, again, will lead to the renaissance of the exploration of mines and mineral research”, says Michaux.

According to Vesa, the European Union has already woken up to in this matter. “Measures have been taken to alleviate the regulations concerning production plant permits and to clarify the role of critical raw materials”, said Vesa.

The ratio of mineral quantities required for green transition and the known mineral deposits.

The figures show, for each mineral, the ratio of the quantity required to phase out fossil fuel and the size of the known deposits. For example, the demand for copper is 7.7 times the global reserves known in 2019.

The article of the seminar is written by reporter Hannes Mäntyranta.

One of the main speakers at the seminar was Associate Research Professor Simon P. Michaux from Geological Survey of Finland (GTK). In his presentation he  presented critical views concerning the plans to advance the green transition. Please view the presentation of Professor Michaux here below.

The videos of the two other main speakers Johanna Buchert and Erno Mäkinen can be found on the corresponding Finnish page. The videos are in Finnish.

”Minerals and mining required to phase out fossil fuels”